It was 2006 and playwright August Wilson needed a producer. The two-time Pulitzer Prize winner had died a year earlier, and it looked like the last installment in his ten-play Pittsburgh Cycle chronicling the black experience in America during the twentieth century might be buried with him – or certainly there was a good chance it wouldn’t reach a New York stage. Americans simply weren’t in a soul-searching mood. They didn’t want to be reminded of the two useless wars they were fighting, or the bogus Bush Presidency, or rising sea levels. They wanted to be entertained and Broadway’s producers willingly abetted them. The Golden Age of musicals had arrived, with packed houses of theatregoers thumbing through Playbills for The Lion King, Hairspray, and Wicked, while dramas were few, frequently revivals, and always safe. Little challenged the public’s complacency or provoked a contradictory thought, and certainly nothing asked us to confront the burning issues of the day.

To me, it was like Nero playing his violin while Rome burned. 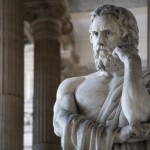 By nature, I am a political animal. Sure I enjoy foot-tapping showstoppers, but I am equally entertained by books, movies and plays that make me think. And, it’s those thoughtful pieces that stay with me long after my foot has stopped tapping to the latest popular ditty. In 2006, there was hardly a play on or off Broadway that I wanted to see, let alone a play with serious political content. I decided to do something about that.

With the support of a handful of socially-conscious donors, I established the Smith Prize to encourage playwrights to write political theater. Arguably almost anything can be interpreted as ‘political’, so originally eligible plays had to, in some manner, address at least one of the questions: Who are we as Americans? What are we becoming? What are our global responsibilities? While those questions have been replaced by defining political theater as addressing concerns that effect the American body politic, the prize has always favored plays that tell intimate stories driven by bigger picture events.

Initially the Smith Prize was a $5,000 award evenly divided between the playwright and the first theater to mount a full production of the winning play. The intention has always been to get the plays on stage, not simply reward playwrights for well-written pieces that will never be seen by the public. From the outset, the prize struck a chord with playwrights, with close to three hundred submissions the first year. Though that number subsequently dropped as playwrights better understood the prize’s objectives, the range of topics remains impressive; among them, stories of war, racism, corruption, and immigration told from the perspectives of simple people whose lives are profoundly changed by political events.

All of the Smith Prize plays have gone on to successful productions, but none has made it as far as the 2012 winner, Grounded, by George Brant, a one-woman show about a fighter pilot who is ‘grounded’ after she becomes pregnant. Eventually she returns to the battlefield, but by then, her assignment is to fly sorties over Afghanistan by piloting drones from the safe distance of a trailer parked in Las Vegas. Grounded examines what is asked emotionally of today’s soldiers, who fight wars and drop bombs from thousands of miles away, yet see their destruction with an acuity made possible by technology which no warriors have ever witnessed before. Brant’s play has racked up accolades across the U.S., including The New York Times, and was selected by England’s prestigious newspaper, The Guardian, as one of the top ten plays in London last year. All the praise has been justified. Here’s only one passage from this tremendously powerful work:

The Smith Prize has evolved since its inception, from an award for an existing play into a commission to write a new one. It has also doubled in value to $10,000, which provides a $5,000 grant to write a play based on the winning competitive proposal, $2,500 for the play’s further development through readings and workshops, and $2,500 to the first theater to produce it. Crucial to making the Smith Prize possible is raising $2,500 from private donors, meaning that every dollar donated is matched three-to-one by me and the National New Play Network, which administers the Smith Prize.

No doubt if Odysseus had come home every day, his story would have made a very different book. No doubt, too, if people thought about and acted on the critical issues of our time, the world would be very different. Ultimately that was my goal in creating the Smith Prize for Political Theater: to encourage people to act, individually and collectively, to make our world a better place for all of us.

For more information on the Smith Prize, or to make a donation to it, please visit: http://www.nnpn.org/about/programs/smith-prize. No gift is too small.

Timothy Jay Smith, a member of the Paris Writers Group, is also the author of Cooper’s Promise and A Vision of Angels.