An interview with Whitney Scharer, author of The Age of Light

“Rapturous and razor sharp all at once, The Age of Light fearlessly unzips anything we might know of Lee Miller as model and muse and recasts her as artist, free thinker and architect of a singular and unapologetic life. This novel sparks on every page.” –Paula McLain, New York Times bestselling author of The Paris Wife and Love and Ruin.

“Sweeping from the glamour of 1930′s Paris through the battlefields of World War II and into the war’s long shadow, The Age of Light is a startlingly modern love story and a mesmerizing portrait of a woman’s self-transformation from muse into artist.”–Celeste Ng, New York Times bestselling author of Little Fires Everywhere.

Whitney Scharer, the author of Age of Light, spoke at the American Library in Paris on September 3, 2019 and the Petite Lumiere Librairie the following evening. Her historic novel focuses on the relationship between the Surrealist Man Ray and Lee Miller, a former Vogue model, who became a photographer and war correspondent during WWII.  We discussed the business aspects of her book, which received a million-dollar advance from Little Brown. This large advance was especially notable because Age of Light is her first book.                             See:  www.whitneyscharer.com 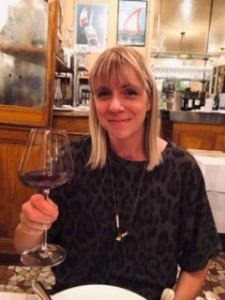 During our interview, it became clear that Whitney had broken some of the main rules of publishing. Our interview starts with those questions.

MD.   How did you find your agent?

WS.   “I didn’t have an agent until I finished my book. I met Julia Barer at Grub Street, www.grubstreet.org a creative writing center in Boston, where I had been their marketing and development director for ten years. I had written some short stories, have an M.F.A. degree and belong to a writing group called the Chunky Monkeys. They are responsible for much of my success.”

WS. ” I didn’t have a platform. I’d rather write. My webpage was adequate, nothing more. Nor an email list consisting of thousands of potential buyers. I didn’t really have a blog, use Instagram, Twitter or have a professional Facebook page.  I’ve since learned that followers on Instagram.com and Bookstagram.com is one of the best ways to promote your book. A well-designed Facebook page is beneficial. I hired someone to design my new website. My publisher has also been helpful by providing publicists in the US and Paris.”

MD. You had fourteen publishers bidding for the rights to your book. How is this possible? I understood that five large conglomerates own the main publishing companies in the world. Many of their imprints cannot bid against one another thereby keeping advances lower than in previous years.

WS.  ”This is not always true.  Each imprint has a budget. Some larger than others. Of course, their budgets are determined by how successful their book sales have been. Most large publishers have some best-selling authors that support everyone else. My publisher, Little Brown, has James Patterson. The first run is 500,000 copies.  Random House has Harlan Coben. He has sold over six million copies in France.  Authors like Dan Brown keep the whole operation afloat.”

MD  How did you determine which offer to accept?

WS.  ”Julia Barer set up seven, one-hour phone conversations with the seven remaining publishers. Each one called me at home. I was really nervous and asked her what I should say. She told me to be myself, answer their questions and ask some of my own. The final decision was mine. She would provide input if I asked. It was craziest day in my life. Even crazier than giving birth.”

”I thought I was going to have to sell myself. Instead, they were selling themselves by explaining to me their vision, marketing plan, size of their staff and my book tour.  Often, I was talking with one or two people but one publisher had twelve people on the line. They knew I could write. I think they just wanted to make sure I wasn’t insane.”

We narrowed it down to two publishers. At this point, the main criteria for me was the editor. I didn’t want my book to become an orphan, which can happen if an editor is dismissed, retires or joins another company. The editor I selected had been with Little Brown for over twenty years and had an excellent reputation. My agent was very pleased with my choice.”

MD  How long was it from signing the contract to the  published book?

WS.  ”We sold the book on September 20, 2017. Age of Light was released on February 5, 2019 – one year and four months. It also sold to fifteen foreign publishers. It took seven years to complete my book. The first two years were reading everything I could find about Man Ray, Lee Miller and that period in history. Lee is known for her quote, ‘I would rather take a photograph than be one.’ Also, her Holocaust photographs and self-photo taken in Hitler’s bathtub.”  https://time.com › lee-miller-the-woman-in-hitlers-bathtub-munich-1945

MD.  Were you consulted about the cover design?

WS.  ”Yes. They sent me three or four samples. I made the final selection. They kept my book title.”

MD.  You mentioned that you and another writer taught a workshop, “How to Write Sex Scenes.”  How was that organized? How many people attended?

WS.  ”Chip Cheek, the author of Cape May, and I started the workshop by reading some really bad sex scenes. There’s actually a “Bad Sex in Fiction Award.” We selected some of those. James Frey won it in 2018 for a scene that takes place in a Paris bathroom.”  https://literaryreview.co.uk › bad-sex-in-fiction-award

“Then we read what we considered to be good sex scenes from Broke back Mountain, Conversations with Friends by Sally Rooney, Christopher Castellani’s Leading Men, which features Tennessee Williams.  Also, Castellani’s “All this Talk About Love.”

”Sex scenes shouldn’t be gratuitous. They should make the plot move, improve understanding the character, be a moment of high drama, build sexual tension and have a reason to have to be in the story.”

”At the end, we had a Q and A session. About sixty writers attended.”

MD.  How has your life changed since publishing Age of Light?

WS. “I’m still building a platform and am writing a new book. It may be set in Palm Springs and Los Angeles in the 1920′s. I feel it’s important to give back to the literary community through mentoring and workshops.  Even though I’ve written since I was a child, I now feel like a writer and we’re all on a pedestal. My husband, daughter and I also have a new home in Boston.

“I also keep meeting fascinating people. Did you know that Penelope Fletcher’s mother was a codebreaker in WWII?” (Penelope is the owner of the Red Wheelbarrow Bookstore).

MD. If you could ask Lee Miller a question, what would it be?

WS. “Lee had a son after WWII. Anthony Penrose was raised mainly by a nanny. I’d like to know how Lee felt about being a mother.”

We finished our Grand Mariner Souffles and walked out into the cool Paris air. Whitney flew back to Boston the next day to embark on her US book tour.

Whitney Scharer and numerous authors, who have spoken at the American Library in Paris and Shakespeare and Company, are also available on youtube.com. Perfect for viewing while on the treadmill or drinking a glass of wine.